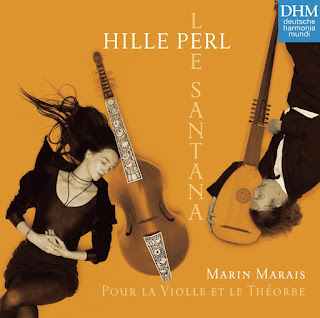 
I am a great admirer of the work of Hille Perl, although I haven't always liked her collaborations with Lee Santana (their recent Born To Be Mild, for example).  However, this is first-rate, I think.

These are some of Marais' gamba works with the basso continuo arranged for the theorbo.  It's a lovely combination of sounds, which Perl and Santana use to produce a very fine disc.  The overall sound is fabulous, rich and deep and there's plenty of melodic and harmonic invention here, too (as one would expect from Marais.)  Both play beautifully, with virtuosity, mutual understanding and an obvious love for what they are playing.

The result is a disc of very satisfying music which rewards careful listening, but you can also just sit back and luxuriate in the sound (beautifully recorded by DHM).  The notes are in Hille Perl's usual…er…individual style which may suit others better than it does me, but there is plenty of scholarly content too.  It's a really good disc, and one which I can recommend very warmly.
Posted by Sid Nuncius at 08:15 No comments: 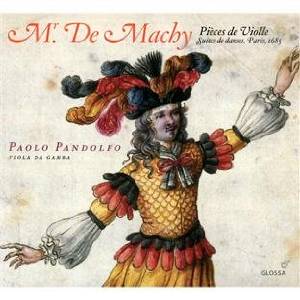 Review:
Another gem from Pandolfo


Paulo Pandolfo has been making brilliant recordings for decades now, and this is another gem, I think.  The music is by de Machy, a composer I'd never heard of before, and published in 1685 (the year of Bach's birth, to put it in context).  It's all for solo viola da gamba and arranged into Suites of dances – a familiar format at the time.  It is varied and enjoyable, with melodic invention and skilful polyphonic writing for the instrument, on which de Machy was an acknowledged master.

What makes this disc so enjoyable, of course, is the playing of Pandolfo.  As always, it is virtuosic, expressive and free-flowing.  Pandolfo's almost improvisatory-sounding style works very well with these pieces, and I find the whole thing a pleasure.

Glossa make their usual beautiful job of both recorded sound and presentation, and this is a very fine disc all round.  If you like the gamba as I do, or just have an interest in early Baroque music, don't hesitate – this is a cracker!
Posted by Sid Nuncius at 08:00 No comments: 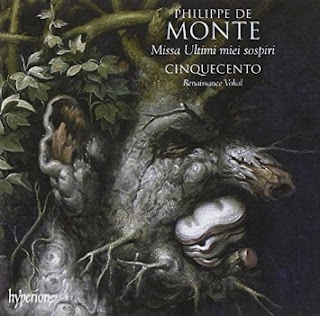 Considering his vast output of music, Philippe de Monte doesn't feature in the catalogue all that much, which is a shame as this disc shows that he was a composer of real stature who produced some very fine works.  I had previously known de Monte largely through his famously sending his lovely motet Super flumina Babylonis to Byrd, lamenting the oppression of Catholics in England (and Byrd responding with a fabulous setting of Quomodo cantabimus?)  This disc comprises a very fine mass setting, a Magnificat and several motets and is a very welcome addition to my collection.

Cinquecento sing the music superbly.  The beautiful sound which was such a feature of their disc of Regnart's music is here too.  They are an all-male sextet with top lines sung by countertenors, so the pitch is relatively low and this and the resonant acoustic gives a fabulous, warm, enveloping sound which loses none of the detail and expressiveness of either the music itself or the fine performance.  Intonation is impeccable and the singing is wonderfully clean and sympathetic to the text without disturbing the overall beauty of the sound.  The combination of top-quality performance with excellent recorded sound makes this a favourite disc of mine and I recommend it very warmly indeed.
Posted by Sid Nuncius at 19:13 No comments: 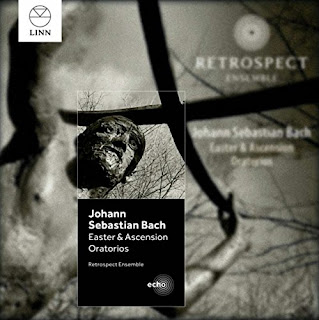 I think this is a quite exceptionally good disc of two of Bach's great choral works. The two oratorios here are on a very grand scale by comparison with most of Bach's cantatas, and the performances make them something very special indeed.

The music itself is glorious: Bach included plenty of brass and percussion which gives these works immense power and richness, but also structures them beautifully so that there is plenty of quieter spiritual reflection too. The combination is quite wonderful, and the Retrospect Ensemble and cast of soloists perform it superbly.

Both the orchestra and chorus are relatively large, but there is none of the ponderous, over-reverential and frankly turgid feel of some older large-scale recordings. The entire ensemble is nimble and light-footed throughout while still having plenty of power and spiritual depth where needed. Bach's essential pulse never gets lost, and some of the instrumental playing, notably in the trumpets, is quite brilliant.

The soloists are simply brilliant. They are four of our finest singers in this repertoire and every one of them excels, so that the arias and recitative shine with depth and beauty. Just as one example, I find James Gilchrist's singing of Sanfte soll mein Todeskummer simply spellbinding here, and the same can be said of other arias from all the soloists. It's fantastic stuff throughout.

Linn make their usual beautiful job of the recording, the disc is very nicely presented and it's an all-round gem, in my view. There are an awful lot of recordings of Bach's choral music; this is among the very best. Highly recommended.
Posted by Sid Nuncius at 08:18 No comments: 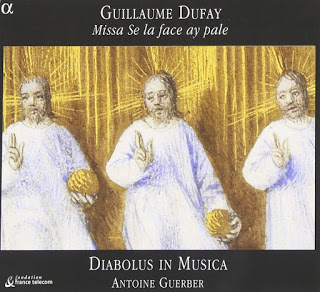 
I love this disc.  I don't always find Dufay easy to listen to, but this is a rich, moving and satisfying performance.
Dufay's music is from the mid-part of the 15th Century and so can have a spare, even austere sound to the modern ear.  This can be very lovely, but in some recordings I find the spareness slips over into bleakness which can be tough going for the duration of an entire mass setting, say.
I think Diabolus in Musica get this just right.  They bring a warmth of sound and lovely, full resonance and warmth of sound to it which, combined with a sedate but appropriate tempo, makes the music glow while never slipping into blandness or losing the music's sense and structure.  Technique is excellent, with impeccable intonation and a lovely fluency of line.  They sing at a lower pitch with countertenors taking the top lines, which emphasises the bass lines beautifully, and the whole thing is a real pleasure to my ears.
This is one of the loveliest and most accessible recordings of Dufay that I know.  Alpha make their usual excellent job of both recording and presentation, making it an all-round gem, I think.  Very warmly recommended.
Posted by Sid Nuncius at 10:12 No comments: