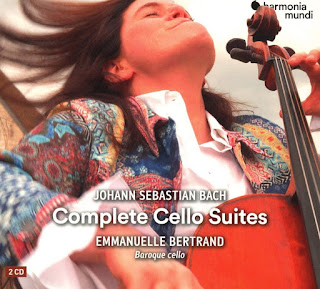 
I am very impressed by this recording. Perhaps to my shame, I had not heard Emmanuelle Bertrand before so I approached this with a little dubiety because there are now so many recordings of the Bach Cello Suites and I wasn’t sure we needed yet another. I was wrong.

Bertrand is plainly a wonderful cellist. Her technique is impeccable, so she makes light of the technical challenges in these wonderful works and makes them sing and dance delightfully. She also plainly “gets” Bach, because his dancing rhythms and his fabulous emotional expressiveness all shine through here. Her tempi are generally on the brisk side but never inappropriately rushed and she uses rubato with restraint, thought and care to phrase and give meaning to the music while never disrupting Bach’s essential pulse. Her approach reminds me slightly of Paul Tortelier (a very good thing) but she’s her own woman who puts Bach first but invests the music with her own sense.

There is real emotional depth here in movements like the Sarabande from the Fifth Suite, joyous beauty in the Prelude to the Third Suite, delightful vigour in the closing Gigues, and so on. Bertrand’s cello sounds fabulous throughout (although the acoustic is slightly over-resonant in places for my taste). The whole thing is a real pleasure which I suspect will take its place among my best-loved recordings of the Cello Suites. Very warmly recommended.
Posted by Sid Nuncius at 07:06 No comments: 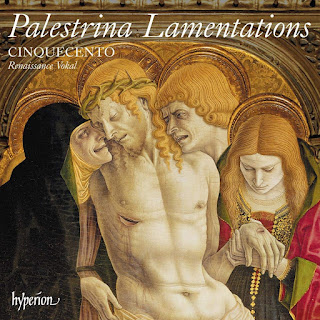 Review:
Another gem from Cinquecento


This is yet another superlative recording by Cinquecento, who are now among the very finest ensembles in this field.

This truly emotive music from Palestrina and, for me at least, utterly falsifies the notion that he was all about form and technique but had little real musical depth. The Lamentations truly lament here without ever becoming turgid or depressing, and Cinquecento really do it proud. They sing with impeccable technique, of course and produce their customary beautiful sound, but they also engage fully with the text to bring out its real spiritual depth and meaning.

The excellent notes are written by Bruno Turner. I have owned his recording with Pro Cantione Antiqua of Palestrina’s Lamentations Book Four for years, and although I respect Turner greatly, that disc has never been a favourite Palestrina recording. This one is and I am confident that it will continue to be a favourite for many years. Very warmly recommended.
Posted by Sid Nuncius at 07:40 No comments: 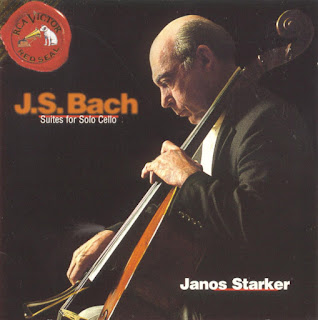 Review:
Not a favourite


I have the profoundest respect for Janos Starker who was a magnificent cellist, but this, his fifth and final recording of the Bach Cello Suites, doesn’t quite hit the spot for me.

There is no doubt that Starker is technically superb, his cello sounds wonderful and he has plainly thought deeply about the Cello Suites for many years. However, I find that there is a point at which interpretive phrasing can become excessive rubato which loses the flow and Bach’s essential pulse; Starker goes beyond that point too often for me. The prelude to the First Suite just doesn’t run as I would like and the wonderful prelude of the Third Suite also loses much of its flowing beauty in Starker’s slightly halting phrasing. I also found the Sarabande of the Fifth Suite (an astonishing movement) lacked a little of the depth and power I often find in it.

At this level of excellence, preferences are almost purely personal and others may disagree, but I prefer other recordings including Fournier, Isserlis, Watkin, Gastinel I’ll be sticking to them.
Posted by Sid Nuncius at 07:19 No comments: 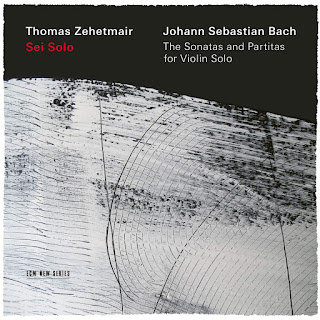 Review:
Technically brilliant but rather remote


Thomas Zehetmair is an astonishingly brilliant violinist, but I didn’t get on well with his first recording of the Sonatas and Partitas from 1983. I found them very remote and forbidding, but I was looking forward to hearing this new recording. For me it’s better and more approachable, but doesn’t really speak to me.

My reservations are almost entirely personal; Zehetmair’s technique is unimpeachable and he plainly thinks deeply about the music and gives it an interesting, thoughtful interpretation which I am sure many people will find rewarding. For me, though, he still sounds intellectually remote and the music lacks much in the way of the warmth of, say, Rachel Podger or Isabelle Faust. Even Viktoria Mullova’s interpretation (which I love) is very sinewy but retains quite a welcoming feel as though she wants you to join her in the music. Zehetmair still sounds to me as though he’s a long way away in his own intellectual world and isn’t very interested in whether anyone else is with him or not.

As I say, all of this is a very individual response; others may feel very differently about what is a virtuosic performance. Personally, though, this isn’t a favourite.
Posted by Sid Nuncius at 06:49 No comments: