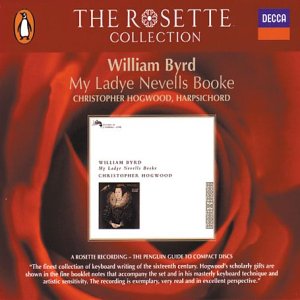 
This is a wonderful collection of Byrd's keyboard music.  Although he is better known for his polyphony, Byrd wrote a great deal of very fine music for harpsichord, virginal and other keyboard instruments of the time; this is some of the best of it, played on the harpsichord by a real master of the instrument.

The 3CD set is a wonderful, varied sequence of mature works by Byrd, Nos. 1-25 being largely pavans and galliards and Nos 26-42 fantasias and variations.  There is a wealth of wonderful stuff here, showing what a truly great, innovative and imaginative composer Byrd was.  It is played superbly by Hogwood, with real sensitivity and insight - and it goes without saying that he has the technique and virtuosity to allow every nuance of feeling and atmosphere to shine through.

The recording is lovely, giving a fabulous rich sound with none of the tinniness which sometimes afflicts harpsichord recitals.  Hogwood's own notes are full, very interesting and very readable, and it's a really good set all round.  Very warmly recommended. 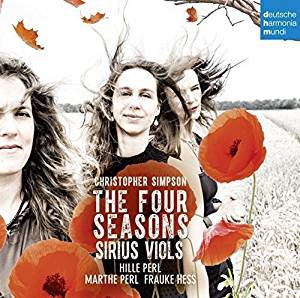 
This is absolutely excellent.  Hille Perl is a very fine gamba player who has made a lot of really good recordings (and some that I haven't liked).  This is one of her best – thoughtful, superbly played and very enjoyable.

Simpson was a great English gamba player of the early 17th Century and The Seasons is his best-known work.  It's easy to see why; it is varied and very involving with a fine variety of moods and some lovely melodic and harmonic invention.  Perl and her ensemble play it superbly, I think, with intelligence, insight and a remarkable beauty of sound in many places – the opening movement of Spring, entitled Fan, held me absolutely spellbound by it's sheer loveliness, for example.

I have fine recordings of this work by Les Voix Humaines and by Sophie Watillon, of which this is at least the equal.  It's a musically rewarding and very lovely disc – beautifully recorded by DHM.  Warmly recommended. 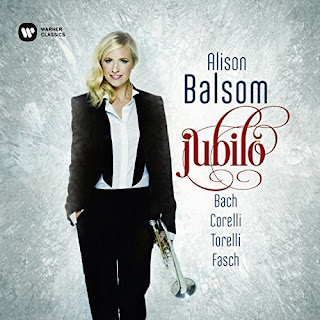 Review:
Another cracker from Alison Balsom


This is yet another very fine disc from Alison Balsom.  She continues to be both a genuinely world-class musician and a great ambassador for classical music.

In Jubilo, she has recorded a selection of Baroque concerti and transcriptions by Fasch, Torelli, Corelli and J.S. Bach.  All are fine works, to which Balsom lends real class with superb playing.  Some thrilling, stratospherically high pyrotechnics are made to sound as natural as breathing, and the slower more evocative passages are simply lovely.  It is here that Balsom really shines, I think, because she gives the music real depth and feeling, coupled often with a genuine gentleness and subtlety which isn't often associated with the trumpet.

The ensemble playing and singing is excellent – as you'd expect from such superstars as Pavlo Beznosiuk, Stephen Cleobury, and a world-class orchestra and chorus.  It's a lovely programme, helped by transcriptions of a couple of Bach's greatest hits, and the whole thing is a real pleasure.

I think that this is a disc with real popular appeal, but which also has genuine musical merit so that crusty old classical listeners like me will find it very rewarding, too.  It is, in short, a cracking, hugely enjoyable disc which is warmly recommended.
Posted by Sid Nuncius at 19:04 No comments: 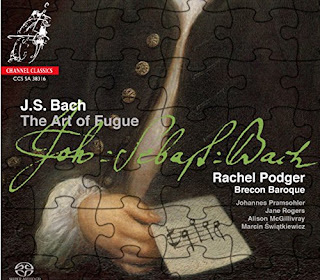 
This is quite fabulous. Rachel Podger is widely recognised as one of the world's leading baroque violinists and interpreters, and this is yet another excellent recording from her.  She and her fellow musicians have produced something very special here, I think.

Bach's Art of Fugue is written in open score, allowing it to be played on all manner of instruments, including the keyboard.  As a result there are many very fine recordings already in existence, including my two personal favourites by Phantasm (arranged for viol consort) and Angela Hewitt on the piano.  This is their equal, I think.  It's not an easy work to get right for performance; it is extremely cerebral, of course, but there are genuine emotional and spiritual statements here and balancing the two can be tricky.  To my ears Podger and her ensemble get it exactly right; they vary the instrumentation to maintain interest, the clarity of line and fugal structure is all there, but there's also a real sense of the spiritual depth of Bach's writing and it's spellbinding in places.

The playing is exceptionally good, as one would expect from musicians of this calibre.  In chamber playing there is often something rather indefinable which goes to make a great performance in addition to technical excellence, precision and so on; it's to do with the players having a shared love of the music and a shared sense of its real meaning.  I would be very hard pressed to say exactly how this shows itself, but I think it does here, and very powerfully.  For me, it lifts the performance from the very good to the exceptional.  Also (and I know not everyone agrees with me here), I wholeheartedly approve of the decision to end the disc with the incomplete version of Contrapunctus 14 as Bach left it at his death.  That sudden halt has a poignancy I find in few other places in music, and it gets me every time here.

The notes are adequate if not brilliant – but that's only a minor point.  What really counts here is the music and its performance, both of which are superb.  I said last year of Rachel Podger's  magnificent recording of Biber's Rosary Sonatas that there would be something seriously wrong if it wasn't a major contender in the next Gramophone Awards (there wasn't – it won one) and I can say the same of this.  It's a wonderful release.
Posted by Sid Nuncius at 18:30 No comments: 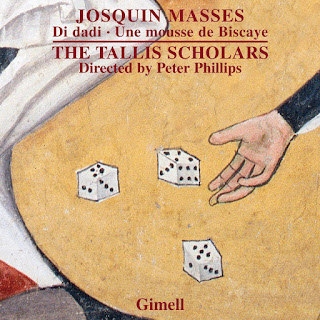 Review:
Another excellent disc from The Tallis Scholars


This latest addition to The Tallis Scholars' Josquin mass cycle is, like the others, quite fabulous.  Here we have two early masses whose authorship is perhaps questionable, but which are still very fine and worthy of inclusion under Josquin's name.

Both these settings and their respective performances are excellent; slightly strangely, it is the more obscure (and more doubtful) Missa Une Mousse de Biscaye which I find the more rewarding.  Perhaps this is because it is new to me, but its prominent lower register in particular makes a powerful impact on me and the overall sound often puts me in mind a little of the opening of Josquin's great motet Praeter rerum seriem.  The Missa di dadi is a little less visceral but still very potent, and both are sung with The Tallis Scholars' trademark precision, beauty, engagement with the text and wonderful fluency of line.

I ran out of superlatives to use about The Tallis Scholars quite some time ago.  I have bought each disc as it came out for over 30 years now; I have never been disappointed and have often been thrilled.  This is another truly excellent release in a series which will surely be the benchmark for Josquin masses for many years.  It scarcely needs an endorsement from me, but I can still recommend this very warmly indeed.  It's another real gem.
Posted by Sid Nuncius at 19:18 No comments: