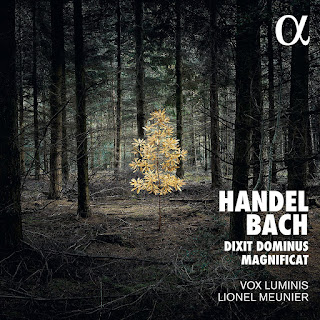 
This is another excellent disc from Vox Luminis.  I already have several recordings of each of these works but was very happy to try interpretations by this excellent ensemble and they were well up to expectations.

The music itself is, of course wonderful.  Both Bach's setting of the Magnificat and Handel's Dixit Dominus scarcely need any praise from me because they are so well known, so enjoyable and obviously such works of genius.  Vox Luminis do them proud.  There is immense skill and virtuosity here among both singers and players, but it's worn lightly so that the music flows and coalesces completely naturally.  The balance is excellent so the overall sound is lovely (and very well recorded) and there is real emotion throughout -  often joy, but true contemplative spirituality too where appropriate.

I don't think you could do much better for either of these two great works.  This will stand alongside my old, dearly loved recordings by John Eliot Gardiner, Andrew Parrott and others and I can recommend it warmly.
Posted by Sid Nuncius at 08:24 No comments: 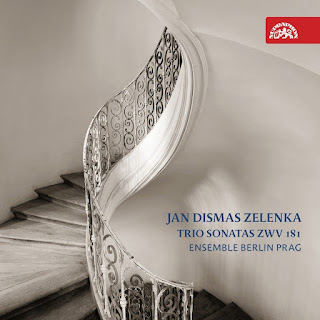 
I have owned and loved both of the recordings of these sonatas by Heinz Holliger and his ensemble for many years.  This is as good as either, I think.

The music is terrific; it is rich, varied and even a little strange in places, but it's thoroughly enjoyable Baroque chamber music which is also very rewarding to listen to.  The playing of Ensemble Berlin Prag does it full justice.  They are under the "musical supervision" of the excellent Reinhard Goebel, whose involvement persuaded me to try this set in the first place, and the result is a delight.  They are supple and very responsive to the music, giving it full weight where it requires it but with an underlying sense of real enjoyment and a little playfulness on occasion.  It's terrific stuff and I love it.  The recorded sound is excellent and the whole effect is a pleasure from start to finish.

In short, this is a little gem of a release which I can recommend very warmly.
Posted by Sid Nuncius at 07:42 No comments: 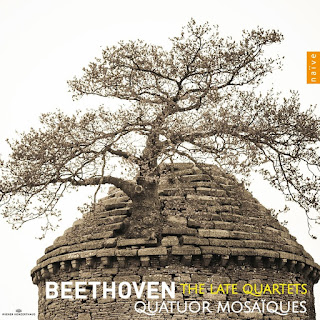 Review:
Good, but not the Mosaiques best


Although Quatuor Mosaiques are among my very favourite quartets, I'm not wholly convinced by this set.  I think their Mozart and Haydn recordings in particular are outstanding, with a wonderful balance between formality and emotion.  Here, I'm not sure that balance is quite so well struck.  These are some of the most powerfully emotional works in the canon and the Mosaiques don't always quite get to their heart for me.

One touchstone for me in the Late Quartets is the wondrous slow movement of Op. 132, with its limpid, meditative beauty shot through with flashes of piercing joy.  Although the Mosaiques bring their characteristic technical brilliance and thoughtfulness to it, it really doesn't move me in the way that the Tacaks or Alban Berg Quartets' interpretations do (among others).  I felt this way throughout, really – it's good, but doesn't quite get there.

I am slightly better disposed toward this set than C.Wake, but I do share his reservations.  These things are a matter of personal taste at this level of musical excellence, but I can only give this set a somewhat qualified recommendation.
Posted by Sid Nuncius at 07:48 No comments: 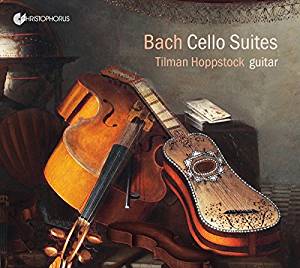 
I like this disc very much.  I approached it with caution because there are now so many versions of the Cello Suites of, it has to be said, varying quality, that I wasn't sure that we needed another.  However, I found Tilman Hoppstock's guitar transcriptions engaging and genuinely original in places.

Hoppstock has chosen to record the two minor-key Suites, Nos 2 & 5, which aren't the most accessible or popular.  He has also recorded Suite No.1 which is a rather obvious choice, but to his credit has elected not to start with it and has also made an interesting transcription.  All of the transcriptions hold genuine interest, I think; he has added significant harmonies throughout, but they all work very well.  There are some very interesting deviations from what I would normally expect. For example, the wonderful Sarabande of Suite No.5 isn't the introverted, emotionally intense exploration of many cello interpretations, but to me sounds like an almost frostbitten evocation of ice.  I was sceptical about the inclusion of "Air on a G String" as a "bonus" track, but I loved the tiptoeing-cat feel of the bass line.

Hoppstock seems to "get" Bach, so that even the occasional slightly romantic-sounding flourish seems quite appropriate and for me the spirit of Bach shines through the whole thing.  He plays excellently, sailing through the virtuosic passages with no sense of strain and the sound of his guitar is lovely.  In short, this is an excellent release which rather surprised me with its quality.  Very warmly recommended. 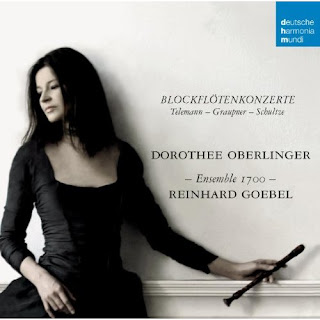 
This is a cracking disc of Baroque recorder concertos.  It features two by the excellent Telemann (whom I still think is a very under-rated composer), one by Graupner and one by Schultze, who is a new composer to me.  The music is all hugely enjoyable, with some genuine melodic and harmonic invention to maintain interest.

It is the playing which really makes this so good.  Oberlinger herself is a very fine player, with dazzling virtuosity in places and a touch and feel which really brings the music to life.  Reinhard Goebel is in his element here and he and the excellent Ensemble 1700 bring a lovely supple feel to the performance.  Slower movements have genuine emotion and depth while there is a real zing in some of the quicker movements which I love.

In short, this is an excellent recording by very fine musicians, which I can recommend warmly.
Posted by Sid Nuncius at 07:54 No comments: 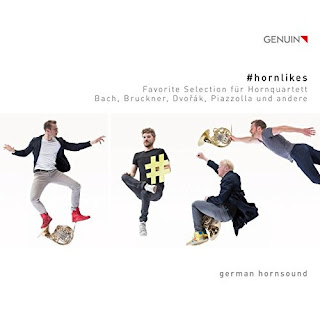 
Rather to my surprise, I like this disc.  I was dubious about the overall idea and was put off by both the trendy title and the "we're-just-four-crazy-guys" cover, but I heard a little on Radio 3 and was sufficiently intrigued to try it.  I'm glad I did.

German Hornsound is a quartet of orchestral horn players; here they have each chosen pieces they like (hence the disc's title) which features in an arrangement for four horns.  The arrangements are generally very good - many are by the players themselves.  It's a good variety of forms and periods and of the well-known and more obscure.  They play very well indeed, bringing genuine feeling and depth where appropriate – rather in the way that a top-class brass band do.

I have to say that an entire disc of arrangements for horn quartet does get a bit much and I have to listen to a few pieces at a time before wanting a bit of tonal variety, but it is far better and more enjoyable than I expected and I can recommend this disc.
Posted by Sid Nuncius at 08:12 No comments: 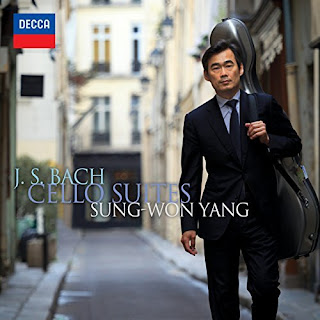 Review:
Not an interpretation for me


I'm afraid I don't get on at all well with Sung-Won Yang's recording of the Cello Suites.  He is plainly a fine cellist, but for me his interpretation of Bach is a long way wide of the mark.

Technically, Yang is excellent and the sound he brings from his cello is lovely.  He is recorded in a very resonant acoustic but it remains clear and distinct so the sonic effect is very beautiful.  However, I simply don’t think that he gets Bach.  As a couple of examples, the Preludes to both the First and Third suites are taken largely at breakneck speed – so much so that much the internal structure is indistinct and lost, including those magnificent, moving wide arpeggios on the Third Prelude.  They also include some pretty extreme rubato, almost skidding to a halt at the end of some phrases which I found a distraction from the music rather than an enhancement.  In the wondrous Sarabande of the Fifth Suite there is some downward portamento so pronounced and inappropriate that it made me physically wince…and so on.

Interpretation is a matter of personal taste, of course, and others may respond better to this set, but I really don’t like it.  There are many, many fine interpretations of the Cello Suites available but I'm afraid that, for me, this isn’t one of them.