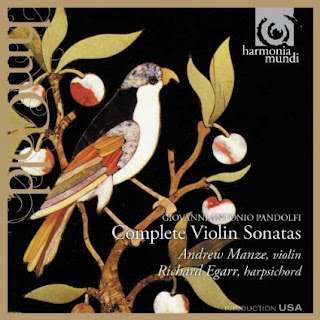 This is yet another great reissue in Harmonia Mundi's Gold series. Pandolfi is scarcely a household name and indeed very little is known about him (Andrew Manze in his typically informative and witty notes says that we might be forgiven for thinking that he had been made up by a bored musicologist on a wet Thursday afternoon), but these sonatas dating from 1660 are music of the highest quality. They are delightful and often intense works which are really enjoyable and which also reward careful listening. I was captivated by them when I first got the original disc and continue to enjoy them immensely.

The reason I invested in the disc in the first place was that it was played by Andrew Manze and Richard Egarr. They are now firmly established as great musicians in their own right, and together as one of the world's finest violin and keyboard duos who excel in this repertoire. This disc is one of their best, in my view. The fantastic empathy they have between them produces something really special, and all the thoughtfulness, virtuosity and verve one would expect from them is there in abundance.

Now it is reissued at budget price this disc is an absolute must for fans of Manze and Egarr, and also for anyone with any interest in Baroque music. Recommended very warmly indeed.
Posted by Sid Nuncius at 18:29