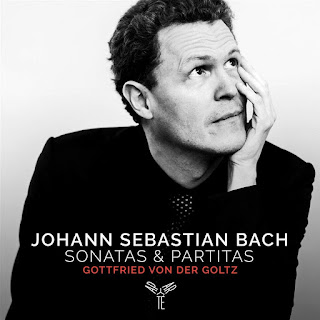 
I like Gottfried von der Goltz’s solo Bach very much. There are many, many recordings of these works now but there is always room for another really fine interpretation.

It is plain that von der Goltz really gets Bach. This is unsurprising after the outstanding Bach recordings he has made as conductor of the Freiburger Barockorchester, and that depth of understanding shines through here. It is often quite hard to put my finger on, but there is an overall sense of a great balance between the composer’s and the artist’s voices, so that von der Goltz gives these wonderful works his own interpretation while never swamping Bach’s own intention. The mighty Chaconne from the D minor Partita, for example, retains all its emotional and intellectual depth while never becoming bogged down in over-seriousness. It’s a difficult line to walk, and von der Goltz gets it just right, I think, as he does throughout. His technique is impeccable, his tone is lovely and the recorded sound is excellent.

I’m not yet sure whether this will take its place among my very favourite recordings by Rachel Podger, Viktoria Mullova and Isabelle Faust, but it’s in the same league, which for me is really saying something. It’s a very fine recording indeed and warmly recommended.
Posted by Sid Nuncius at 07:39