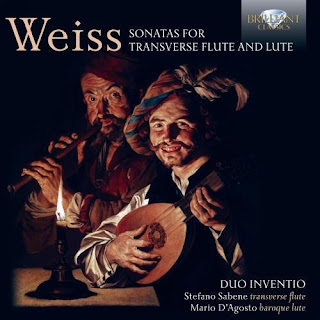 I'm afraid I wasn't very taken with this disc. I love Weiss's solo lute music but I don't think these sonatas for flute and lute are in anything like the same league. The music is pleasant enough but to me lacks much in the way of real substance much of the time, so it becomes rather samey background quite quickly.

This isn't helped by the performances. Duo Inventio play competently enough, but I found there was often a plodding feel to the music, and where Weiss's music should flow and dance it tended to just trudge on. I also thought that the recording of the lute left it sounding very dry and flat of tone.

I'm sorry to be so critical. This isn't objectionable music in any way and the performances are adequate, but compared to the brilliant recordings of Weiss by both Robert Barto and Jakob Lindberg, it's just a bit dull.
Posted by Sid Nuncius at 18:20