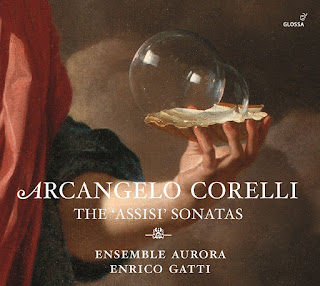 Disputed discoveries of works possibly by famous composers can sometimes be a severe let-down, but this is a very good disc of some relatively recent discoveries, thought by Gatti to be early works by Corelli which pre-date his Op. Trio Sonatas.  Whatever their authorship, they are very enjoyable works and are very well performed here.

The sonatas themselves are brief three-movement pieces, most under four minutes in total, with four later, more substantial sonatas included.  They are charming rather than dramatic or moving, but they do carry some of Corelli's style.  I like them very much and they are very enjoyable to listen to.

Much of this is due to Gatti's playing.  He has a lovely tone (beautifully captured in the recording) and a warm, lyrical approach which goes very well here and adds to the charm of these works.  He seems very committed to the music, investing it with genuine personality and meaning, he draws his fellow musicians with him in this, and the result is a very rewarding disc.

Glossa make their usual lovely job of the presentation, although the notes are exceptionally brief and not terribly informative.  The recorded sound is warm and rich and it's a very good disc all round.  Recommended.
Posted by Sid Nuncius at 07:41