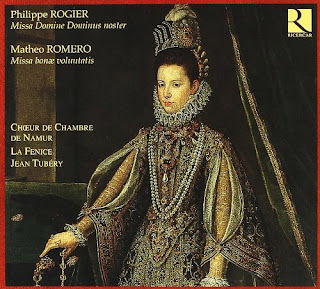 I'm afraid I'm not keen on this set. Although it is good to see two relatively obscure works being made available, the performances aren't that good and some of the music is a bit uninspiring.

Rogier was a very fine composer, but here his music sounds rather flat and featureless. The instrumental ensemble is perfectly competent but they don't really bring a lot of life to the music, and I found the choir disappointingly unengaged with the text. They are technically sound with good intonation and blend, but the overall sound is very unemotional. A somewhat muddy-sounding recording in a rather unsympathetic acoustic doesn't help either. And I have to say that things get worse on the second disc because in addition to all this, Romero's music isn't in the same class as that of Rogier and I find CD2 plain dull, I'm afraid.

I am sorry to be critical, but I really don't think this set is up to the standard we now expect from recordings of Renaissance polyphony. There are now three superb discs of Rogier's works by Magnificat under Philip Cave, all of which I recommend very warmly, and I would suggest that you try them rather than this set.
Posted by Sid Nuncius at 17:02