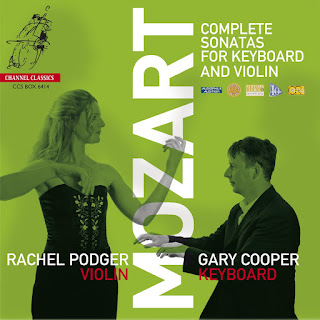 This is a magnificent set. I bought every single one of them as they came out and have been playing them regularly and with undiminished pleasure for a decade now. They are full of delightful sound, perfect balance of parts and the superlative musicianship and form one of the really enduring contributions among the vast number of Mozart recordings available.

Mozart composed violin sonatas virtually throughout his life from the age of eight. Podger and Cooper chose to record them in a non-chronological way with early and late sonatas interspersed with each other on every disc. I think this is an excellent idea - the early sonatas are works which I might not take out and play often, if at all, if grouped together on a single disc. I have several "Complete....." sets of things recorded in chronological order, in which the early discs very seldom see the inside of a CD player. However, interspersed as they are here with more mature works the early works will be heard much more often, and I am glad of it. They are well worth hearing, particularly when so well played.

There is real intelligence and insight combined with verve and virtuosity throughout this set from both Podger and Cooper. A good example of the excellence of their interpretation and musical partnership is the Adagio of K481 (on Vol. 2). It is a varied movement in which the lead and accompaniment alternates between violin and pianoforte and they get it, in my view, exactly right, making it charming, moving and very beautiful by turns. I find a similarly deep understanding of Mozart's music and the same empathy between these two superb musicians throughout the set.

Channel Classics produce excellent sound quality, but the packaging is poor, with very limited notes and information. This isn't a disaster, but I think a musical project of such distinction seems to me to deserve more professionalism from its publishers, even at a very good budget price like this.

Minor gripes aside, this is an essential Mozart set which has been (rightly in my view) showered with awards and very highly praised by professional critics, and I think the series will set the standard for these works for many years. Warmly recommended.
Posted by Sid Nuncius at 08:29